Even though there is a certain satisfaction when packing your project data *perfectly* into the c64 64k’s of memory, most larger demos and games will require both additional code and resources. These resources (such as graphics, music, sprites or pure code) can be stored as separate files on a disk, and can be loaded run-time from the program when needed.

As the original disk operating system (DOS) for the 1541 disk drive is both slow and require that interrupts are disabled while reading, modern c64 programs that require disk access are usually developed with newer “patched” versions of disk reading software – so called fastloaders. The fastloader will replace both the original DOS software on the 1541 drive and on the C64 itself (Kernal). The fastloader will be uploaded to the disk drive and will replace the original software as long as the device is turned on (it won’t overwrite the old API which is stored in ROM and loaded every time you reset the device)

The most famous / best / fastest of these user-defined c1541 loaders are called Krill’s loader (by Krill of Plush).

In TRSE, we have from version 0.06 added automated support for both Krill’s loader and management of files from disk.  In this tutorial, we will set up a .d64 project, add two image files and load these from disk run-time. You can cycle the images by pressing space bar, and we don’t turn off the screen while loading so you can experience the actual loading process.

Step 1: Setting up a project

First, create a new TRSE project and create a new .ras source file named “main.ras“. Afterwards, click the “project settings” button on the right-hand side of the main window. In the new “Target Output” tab, you can customize various target options such as:

The main program file will always be copied to the .d64 disk. In addition, you can specify which addition files you would like to be stored on the disk.

Paw files are previously used in TRSE to specify a list of data files that will be automatically packed and extracted to specified memory locations. Due to the similarities of disk files, the Paw data type is also used for specifying which files should be included on the project disk. The list contains filenames (on pc), filenames on the disk and load address. The filename will also be duplicated as a string in your program. 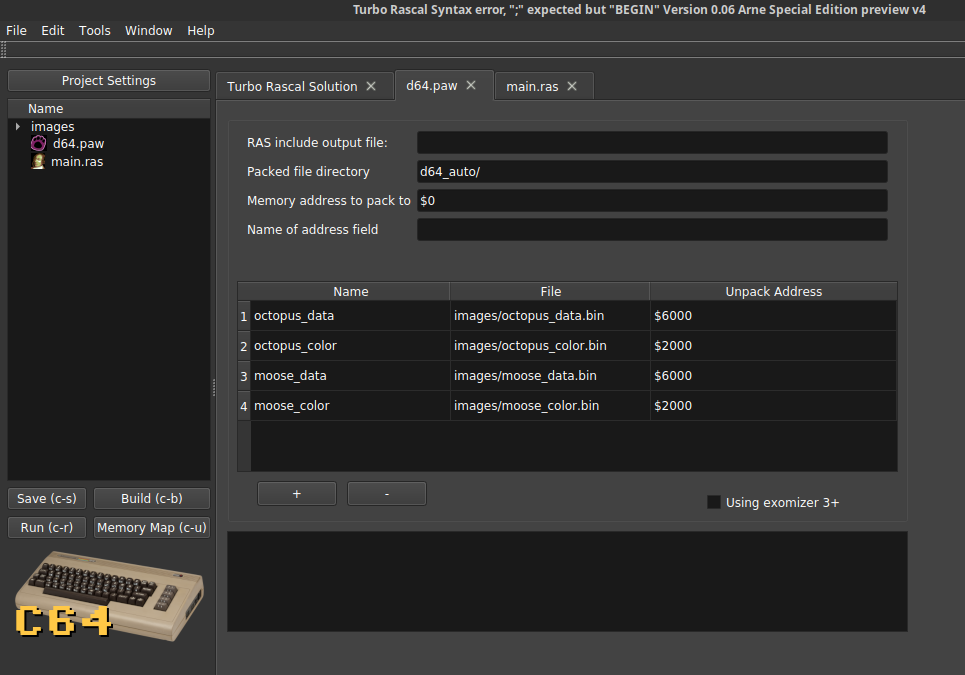 Here’s a detailed list of the Paw file specifications:

Now, copy some mock image files from one of the tutorials (or your own image files) to the project directory and include them as shown in the picture above. Click save and build. Finally, in the “project settings” dialog / Target output, select your .paw file as the project’s file list. The next time you build the ‘main.ras’ file the D64 will be created.

We have finally set up a disk project with some resources (images), so we’re ready to start coding. First of all, we need to discuss how Krill’s loader work.

In the tutorial project file, this is how we decided to do it:

Finally, in order to load a file, all you need to do is to call

Remember that both the my_file and load address are specified in the project Paw file!

The rest of the image viewer

Here’s the source for the rest of the viewer. it will alternate with loading the first and the second file (moose / octopus) when pressing space. Since the screen is on during the load process, you can view the data being loaded real-time.