In this tutorial, we will go through some of the basics of Turbo Rascal Syntax Error by producing a simple plasma effect:

The main stuff we will be covering includes

The C64 has a built-in character set that is located in ROM, but it sometimes better to use a user-defined character set. In the TRSE IDE, you can create your own regular color/multicolor character sets and export them directly to be included in your Turbo Rascal source files.

In the tutorials project, double click on “charsets/tutorial3.flf” to view or edit this particular charset. Fluff (*.flf) files are TRSE binary files, and are all editable in the TRSE IDE image editor. However, to use this images in your c64 project, you will mostly have to export the files to binary format (“Export Bin” button). The exception is files from the TRSE Level Editor, which can be included and loaded directly on the C64.

Here’s the map we will be using in this tutorial: 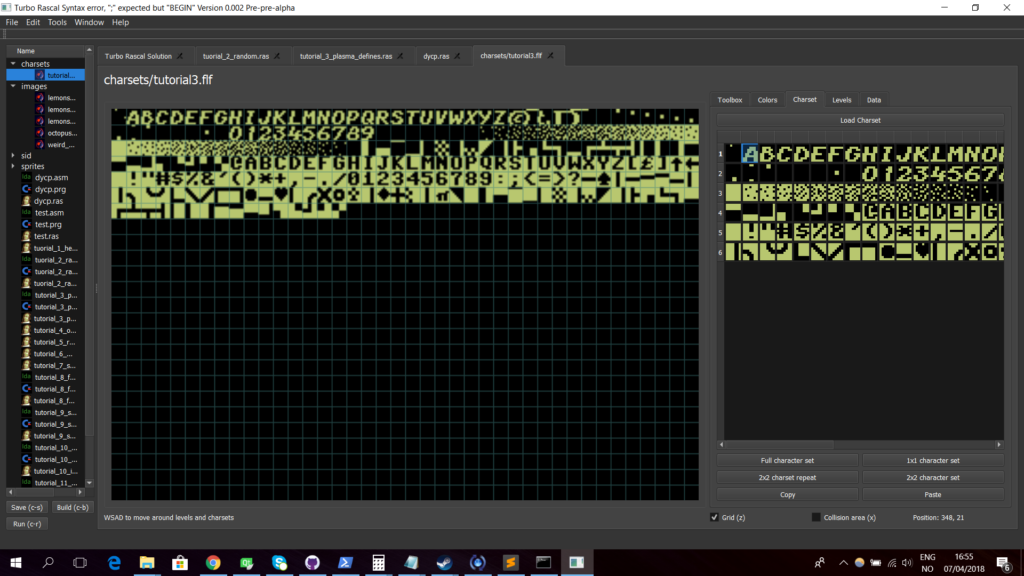 Note that this particular character map has a different font than the standard C64 font, and in addition has blocks from character 64-96 that are “gradients”. These gradient chars will be used to draw the actual plasma, since actually drawing individual pixels would be completely out of the question in terms of speed.

A standard character set with 256 chars contains 8*256 = 2048 = 0x800 bytes if information. You can load the character set (or any other binary file) at a specific position in memory by using the IncBin type definition. Here’s the list of variable declarations:

Note that the charset is now located at $2000 (actually, $1fff, but whatever), which we will point to later in the code.

Preprocessor directives are things that are processed *before* the compiler starts doings its thing. It is primarily used to exclude code chuncks from compilation, or defining global variables. These preprocessor variables are basically a string replace being performed before compiling, and the same goes for file inclusion. Currently, there are three types of preprocessors in TRSE:

In this tutorial, we define a “y_start” as “5”: the y-position where the plasma is going to start.

In addition, we define “include_color” to be “true” (could be anything, just needs to be defined). If you comment out this line, the ifdef-block defined in the “Plasma”-routine will ignore color filling, and the whole effect is sped up.

Procedures are simple in Turbo Rascal. You define them by the “procedure” directive followed by the name of the procedure. In addition, you can define your own parameters as such

However, be aware that procedure parameters are defined as global variables, and must be unique. It is therefore recommended to use names like

in order not to confuse x/y with other parameter names.

The Plasma routine does a couple of things: